The name ‘Kupferquelle’ came from a time when Namibia was under German rule. The name means “copper fountain,” which refers to the rich copper deposits of the Namibian mine town, Tsumeb.

Tsumeb belongs to the world’s most prolific mineralogical sites, and many of the minerals are unsurpassed in variety and quality. The most famous mine in Tsumeb is the “Tsumeb Mine,” which was operated from 1907 to 1996 – it produced 30 million tons of ore, and a total of 267 recognized minerals. 20 of those minerals are not found anywhere else in the world.

The first European record of mineral deposits in northern Namibia is written in the diary of British intellectual and explorer Sir Francis Galton. Galton met with Bushmen and Ovambo transporting ores of copper but made no mention of where the ore was mined. 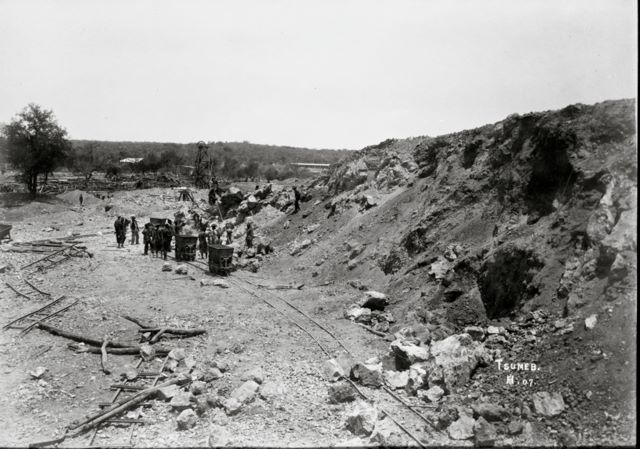 The concentration of ingredients for Tsumeb’s mineral foundations originates in a sulfide deposit rich in many metals. A non-arid environment plentiful in oxygen-rich groundwater contributed to leaching and re-depositing of these elements as new minerals, sometimes in beautiful crystalline formations.

Minerals first described from Tsumeb include:

The Tsumeb Municipality organizes an Annual Copper Festival each spring to give residents and visitors an opportunity to hear the history and see the beauty of Tsumeb. More than 200 small and medium enterprises, and bigger exhibitors, showcase their products and services at the annual event. Lasting four days, it boosts the economic competitiveness of the town, drawing large crowds from all corners of the country and beyond. Take a look at last year’s event here > https://www.facebook.com/events/553380414848534/

If you’re interested in more information, you can visit the Tsumeb Museum. It is housed in a 1915 colonial building that once served as both a school and a hospital for German troops. You can see mineral displays, mining machinery, and other artifacts that represent the area.

The museum is a short 5-minute drive from Kupferquelle and takes you through the heart of the city. Other nearby activities includes the Tsumeb Golf Club, The Tsumeb Cultural Village, and the Arts and Crafts Centre. Enjoy a fact filled day and return to your cozy chalet for a relaxing evening in!