A Forest Frozen in Time

Deadvlei is one of the main natural attractions in the Namibian National Park, Namib-Naukluft. In Afrikaans, Deadvlei means ‘the place where everything ends.’ Generally, it means, ‘dead swamp,’ and is typically referred to as Death Valley.

Deadvlei is a claypan. It was formed when the Tsauchab River flooded, which allowed camel thorn trees to grow. When the climate changed, the sand dunes of Sossusvlei started to encroach and blocked the river. The trees are now dead, but do not decompose due to the dry climate. It’s said that these trees are approximately 900 years old.

In Sossusvlei, roughly every 10 years – following exceptional rainfall, the Tsauchab river fills the clay pan with water, forming a temporary lake. The lake stays for a period of time because the water has to soak through many clay layers. 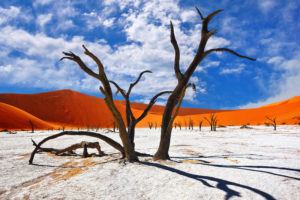 The area is a haven for photographers. Sossusvlei is home to the tallest sand dunes in the world, some of which reach 400 meters high. Photographers love the area because of the stark contrast between the orange dunes, white plains, and sunburnt, dead trees. Experiencing Deadvlei and Sossusvlei for at least 24 hours is truly a phenomenal experience.

Namibia has some of the clearest skies on the planet. Staying around for sunset, the starry sky, or sunrise photos are some of the most amazing experiences.

Not everything within the Deadvlei is dead. Plants that survive rely on the morning mist, and rare rainfall. Some of those plants include salsola, and Nara. Salsola shrubs are known for their resilience and salt tolerance and the Nara is an exotic melon that can only be found in Namibia.

Getting to Sossusvlei and Deadvlei can be tricky. The Namib Naukluft Park sits in the heart of the ancient Namib desert, and it’s the largest protected area in the country. The park was formed by joining together different regions in the area. Visitors can only visit a small portion of the region due to the harsh terrain. Make sure you choose your route wisely, or are prepared with a 4-wheel drive vehicle.